If you haven’t read the rest of the devlogs, you can find them here. You might be missing some context if you don’t.

Also, this is an old blogpost about something that wasn’t actually released as part of the project yet. Maybe one day I’ll finish it but the documentation value is important.

After another successful workshop,

Another Git workshop in the books, as the game server monitoring graphs can attest ✅ So fun when things work out well and people enjoy and learn.

I decided it’s time to tackle issue #26 from the project’s backlog using rust, Yew, and WebAssembly. Here’s how it looks now that it’s done:

This posts in a live log of HOW I did this.

Issue #26 basically means that players can verify that they’ve finished the challenge done on their own. Players being able to check their own work is good for motivating them to finish the challenge. Also, it makes running the workshop even more hands-off, which is great, since it gives me more time to focus on attendees. Here’s the issue:

I’ve also decided this would be a good opportunity to practice more Rust and learn a little about WebAssembly using Yew. Since this is more of a learning exercise, expect this post to be a little more… verbose then usual.

Let’s start with some planning. We will need to:

Developing the webpage with Yew

Getting started with Yew

I started by following the getting started guide. I wanted to make sure the toolchain is up and running and I understood how it works (well, enough to work with it, anyway…).

To start, I created a new rust library and copied the template from the docs. Then I used wasm-pack to pack the rust library into a wasm.js file that a browser could use. wasm-pack requires OpenSSL and pkg-config; On my machine (Ubuntu 20.04 on WSL 2) this was solved by running the following commands:

With yum, you need to install openssl-devel and pkgconfig, instead. Isn’t packaging fun? 😐

Then, running wasm-pack build --target web --out-name wasm --out-dir ./static and serving the output from the static folder using python3 -m http.server 8000 got me this, which was exciting:

And with some quick CSS and structure shoved into the static folder, it quickly looked OK, as well:

Even though I was done with the getting started guide, I still didn’t feel comfortable with Yew. I wanted to get into a good development loop to “get my sea legs” and just feel like I’m learning the new framework in a deep way. I want to REALLY understand this subject - enough to use it in a professional setting.

In order to do this, I broke down the development into small and manageable tasks. This was important since I’m working on this while working on a ton of other stuff as well, and low-level planning is useful for context switches.

Creating a basic component in Yew

I’ve created a new file called level.rs and created a rather basic component in it. While WIP it looked like this:

But ended up looking somewhat sleeker (and with less clicks required!):

To understand what “Components” are, you can refer to the documentation and the source code. For now, let’s walk through my component’s code at this point to make sure we understand exactly what’s going on.

First (after the normal use calls), I defined the component’s state:

Next, I defined the messages of our component. These will be used in the component itself later on.

Then it was time to define the properties:

Finally, we could declare our component! This is a pretty long chuck of code, but a lot of it is documentation, so just try to read it.

As you can see the level component has a TON of log messages. The log actually go out to Chrome’s console using the wasm-logger crate! Here’s how it looks like in the console:

To set this up I only needed to add this to the main file:

And finally we have a level component we’re happy with! Let’s move on 😀

Creating multiple levels from a vector

This was pretty straight-forward. Here’s the result:

First, I defined the level information data structure, which is the “data” counterpart of the LevelComponent:

Then, I change the view function of the main page to include this line, and added the create_component_from_level_info function for the iter().map() call:

Finally, I initialized the “levels” vector with the following const values in create:

Making the flags hashed instead of plaintext

First of all, why is this needed? Well, this is an “anti-cheating” mechanism. At our current state, the flags can be found by inspecting the page’s code. Let’s try to find the level name2’s flag as a cheater.

Let’s quickly hash “flag1” and “flag2” and change the const strings to hashes:

We need to change the implementation of the LevelComponent from a direct comparison to hashing. Here’s how that looks now:

And most importantly - the flag is no longer in the source, so you can’t cheat by reading the source of the webpage itself!

While working on this I ran into a weird panic, so I added the console_error_panic_hook crate to understand the stacktrace better - here are some details about that.

At this point, it felt right to clean up the lib.rs file which felt like it was going out of control (and looking at the remaining tasks, it was only going to get worse). So I decided to move the components into a “components” module. See Managing Growing Projects with Packages, Crates, and Modules from the rustbook for details. Ended up with this, which looks better: 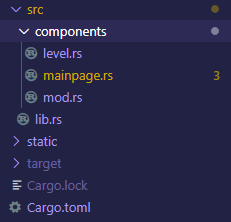 Read the level information from a JSON file

The level information JSON file can’t be read from the filesystem, since we’re running inside the browser. So we need to serve the JSON file and fetch it from the web app. After a couple of tries, I’ve found this YEW tutorial by Davide Del Papa. It’s a little out dated (I opened an issue, of course) but really well-structured!

Now that we have a fetch, that means that we now have a few states. Let’s describe them:

This state should be in our “MainPage” component, which is in change of fetching the data and creating the level components from it. The fetching should be someplace else, so I’ve created a “GetFlagsService”. To fetch the data, I’ve used Yew’s FetchService. To parse it I’ve used serde_json for Parsing the JSON as a strongly typed data structure.

Here’s the GetFlagsService, which is charge of fetching and parsing. It uses a callback that emits the value (or error) to:

To use GetFlagsService in the MainPage component, we had to make some changes. First, add all relevant members to the component’s struct:

Then, add the new messages which help us transfer from state to state. The important one here is FlagsResponseReady, which receives a Result<LevelsInfo, Error> as an argument. This means that when we get the response in the GetFlagsService, we’re going to emit the response as a Result which might be an error and might be OK. We’ll see how we consume that Result later.

Initialize these in create. Note the new FlagsService, and how we’re linking the callback!

In update, we’re dealing with all the new messages. You can see that we’re matching on the FlagsResponseReady message twice! Once when it’s Ok and once when it’s an Err.

And finally, we need to make view deal with all this stuff. We move from “uninitialized” to “fetching” using the self.requested_flags member:

And the component itself is in get_levels_comp, and you can see the different states being managed with Option and self.error:

Now, to test! First, let’s start with a sanity test: the file is correct. It works! 🎉 While waiting for the file it shows:

And then the site boots up and you can put in the flags. This GIF is censored of course :)

Let’s introduce a Typo into the JSON file and see how that looks:

Add a “check all” win state

In this final stage of development, I needed need to add state to the main page which checks how many levels were completed and displays a win message accordingly. There are a few possible solutions to do this, but I’ve opted to go with adding a levels_status map to the main page and having each level component update it via a callback function.

First, I moved all necessary information into the common.rs file: The status struct, the main page messages, and the callback type.

Adding the callback to the level component wasn’t too hard. Using a pub type for it instead of writing out the generic type each time was very useful, since it saved me from errors I had with mismatched generic types. The interesting part is in update, where the component emits its status via the callback:

The main page component now needed to create the state and manage it. The state itself is managed in the levels-status map, which is created in the create function and initialized once we get the flags from the server:

In the update function, the main page handles the callback by accessing the relevant value in the map using the get_mut accessor and changing its value based on the reported status:

Finally, I’ve added the visual indication of the win state with a “totals” functional component. First I added it in the main page view:

Let’s walk through the totals code.

If the levels counter is not initialized yet (since we’re waiting on the fetch to return or we’ve had an error), it’s just an empty component.

Otherwise, we want to count how many flags are correct:

And then show the victory component if all are correct:

Here’s how it ended up looking:

Since this is a very simple static app, all we need is to server the HTML, CSS, levels_info.json and compiled WASM from a static folder, and make sure we serve index.html as the index. We can use simple-http-server which really can’t be simpler. Installation and execution are basically two commands, cargo install simple-http-server and running with simple-http-server --index --nocache --port 1337:

BTW, we can also use miniserve by downloading it from GitHub with wget https://github.com/svenstaro/miniserve/releases/download/v0.9.0/miniserve-v0.9.0-linux-x86_64, then chmod +x-ing it and finally running miniserve --index index.html . inside the static folder - but installation is annoying since you need the nightly build of rust, so we’ll go with simple-http-server.

I decided to not deploy this for now. Maybe in the future. The branch is still open here, so this might actually happen someday!