Part two of the joint project with my intelligent and brave wife, Olga!

This post is a part of a series, so [check out part 1 for context] (../building-a-slack-bot-with-python-on-gcp).

Before moving on the the next big tasks, we wanted to do some small QoL improvements, which we introduced in 3 separate PRs.

Slimming down the Docker Image size

Made my Docker image size 20% (from almost 1GB to 196MB) by adding `-slim` to the base image. Sane defaults, anyone? pic.twitter.com/6yt17kEWpo

Sometimes things don’t make sense to me. Why is the DEFAULT image the one with “batteries-included”, all the bloat, and the huge one? Do developers really prefer things to surface-level work so badly that they are willing to accept images that are 5 times bigger as the default? 🤔

In any case, the diff was very simple:

Shoutout to Will Schenk for the awesome diff shortcode. If you have time after reading this blog, make sure to put Will’s on your read list. Very cool technical musings there!

Adding a test endpoint to the server, to make sure it works

We started by writing a very simple pytest, which just sent a request to the first endpoint we’ve developed, called spots. But then, we realized that once we actually develop that endpoint, the return value will change. So to keep things humming nicely, we added a /test URL to the server which we used for the test.

This is the updated test, where you can see the TODO was deleted. One of the best feelings is checking boxes ✅

We added some basic CI tooling using GitHub Actions, which you can check out here. The CI currently runs flake8 and pytest. We based it off of GitHub’s official Python Application with only some minor changes for Poetry:

Setting up a local development environment

Last time, we managed to deploy our bot to the cloud. Immediate regret followed, as the build-deploy-test loop got a lot longer! Instead of just changing the code to see what happens, we now need to deploy the code to GCP, build a new docker image there, and deploy it. That’s too much time!

To speed things up, we used ngrok to set up a public URL for our local web server, and then configured the Slack app to go to that URL instead of our cloud endpoint. When we’ll release, we’ll need to revert this change.

After downloading ngrok, running it was literally just ./ngrok http 5000. The command gives you a public URL:

And then you configure it in Slack:

With all the POCs we did in the first post and all the QoL improvements out of the way, now we finally feel comfortable enough with the infrastrcture and the build-deploy-test loop to get cracking with developing the core logic of the app!

Let’s do some Product - designing the user flows

One thing we’ve learned since last time with some user surveys was that setting up Google Calendar resources is a total pain, so we need to manage the repository ourselves. With this architectural change in mind, we wanted to design the first user interaction with the bot - setting it up.

Side note: To do this part well, we’ve used a tool I really started to like recently - Excalidraw. It’s the best virtual whiteboard experience I’ve had so far, and I pretty much tried them all.

The bot seems very simple on the surface. You ask it to reserve a spot, it reserves a spot, right? How complex can it be? When starting to actually work on planning the user flows with a DDR, we’ve discovered multiple layers of complexity:

Here’s what we came up with. You’ll need to click the image to scroll around and actually read it:

Since we saw that even just the setup flow is pretty complicated on its own, we decided to implement a little bit more of the bot so we have better domain knowledge before designing the other user flows. It seemed like learning more about Slack bots, designing the code itself a little more, and seeing what’s easy and what’s hard were better avenues to getting a better end product than spending time designing the rest of the flows.

In our initial design, we went for a pretty simple design, mostly meant to make sure we’re adhereing to the Single Responsibility Principle and to expedite development using this trick:

Create an interface for the parking spot ~repository~, so that developing it won’t block us from working on business logic and UX.

Our design ended up here: 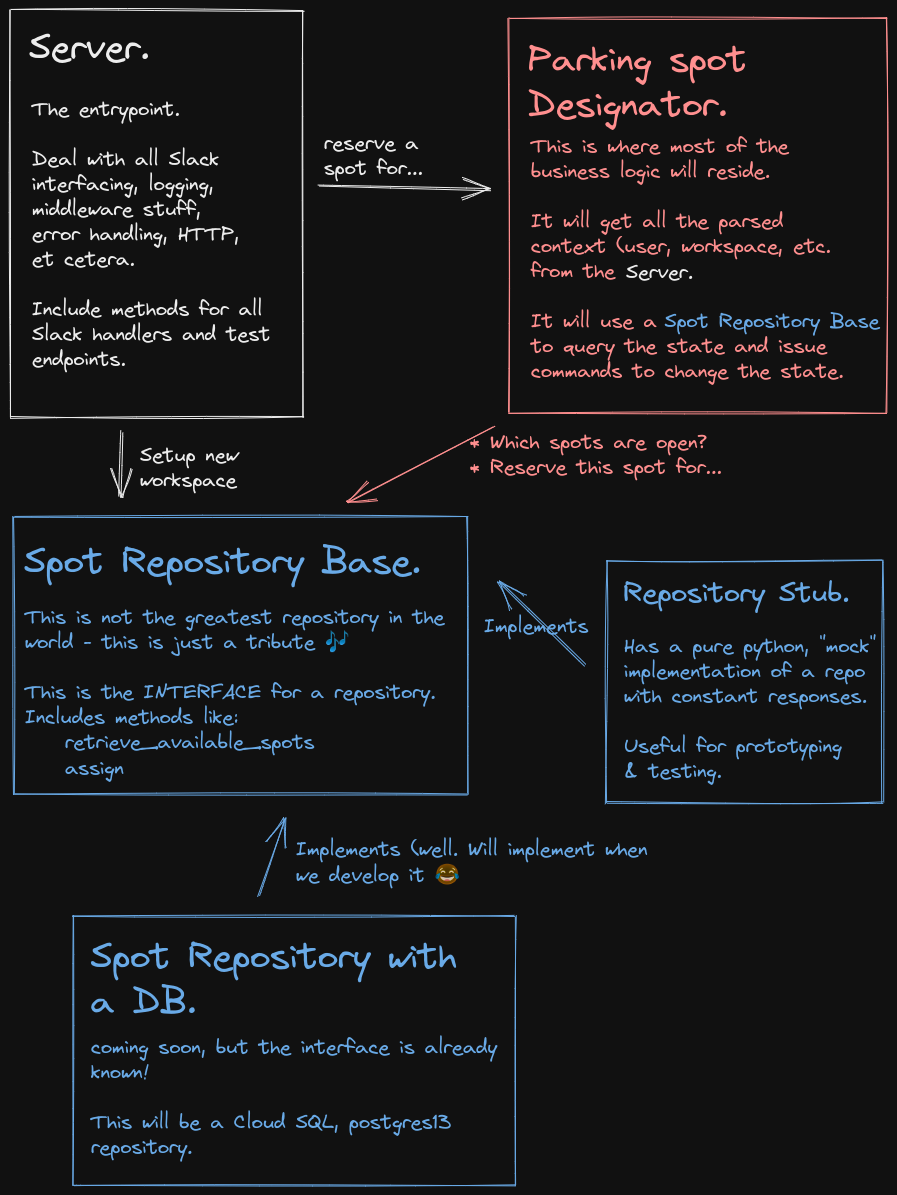 This design also allowed us to test the designator using automatic spec for mocks, which proved very useful in our case. Check out how clear and clean these tests are!

These tests do a TON for the designator without worrying even ONCE about the repository! They tell us a lot about how the interface works and what the designator is doing. They help maintain it on a deeper level than “it’s not working”.

Cool! Since we also implemented a stub, the bot now responds with semi-coherent responses, which is very exciting as well:

Let’s do some Development - using Bolt

The first version of the bot was based on Flask, but the moment we wanted to do something that was actually Slack-ish (in our case it was extracting the user’s name based on the context in the request, which includes the user_id) we felt like it was difficult.

After looking around a bit we’ve found Bolt SDK for Python, which seems packed with great features, useful documentation, and easy to use. We migrated the functions we’ve implemented on Flask to use Bolt, instead. We’ve still kept Flask as the Web server, so that the test endpoint (remember? From the last post) will still work.

Why does the Bolt documentation say:

By default, Bolt will use the built-in HTTPServer adapter. While this is okay for local development, it is not recommended for production.

And why, when you run flask run, it tells you:

WARNING: This is a development server. Do not use it in a production deployment. Use a production WSGI server instead.

And what does that have to do with Whiskey?

Well, since Olga was curious about it, we learned more about WSGI. Instead of parroting it all here, I’ll try to summarize what we’ve understood from PEP 3333:

After spending some time in this rabbit hole, we decided we actually don’t care about it enough at this point, and we’ll stick with Flask and Bolt.

In the future, we’ll consider migrating to the following stack:

So this was completely unnecessary sidetrack. Aren’t those the best? Just ask CGP grey.

Next time, we plan to work on: